Oxford United look to build on two wins from two home games in 2018 when they welcome Bury.

New signings Rob Dickie, Cameron Brannagan and Isaac Buckley-Ricketts will all be hoping for their debuts as United welcome the Shakers. Brannagan and Buckley-Ricketts have had a full week of training and are likely to be in the squad for the first time after joining from Liverpool and Manchester City, with a space in the team opening up following Jack Payne's move to Blackburn.

Left-back Ricardinho serves the last game of his three match ban so Dwight Tiendalli will continue on that side of defence while the U's will wait to see if Ryan Ledson shakes off a virus that has affected him this week after he missed last Saturday's game at Walsall with a knee problem.

Rob Hall and Joe Rothwell are doing well after long term injuries and are now  back out on the training pitches doing light work while Ivo Pekalski is ahead of them in his recovery and starting to join full training. Read a full update from Physio Andrew Proctor in the matchday programme

See Pep Clotet's thoughts full plus an interview with Josh Ruffels, then see/hear the whole game in iFollow. 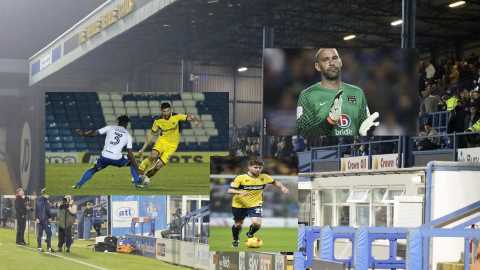 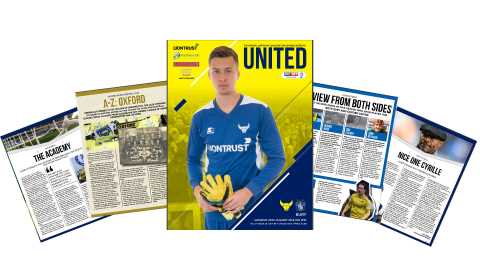 Get With the Programme 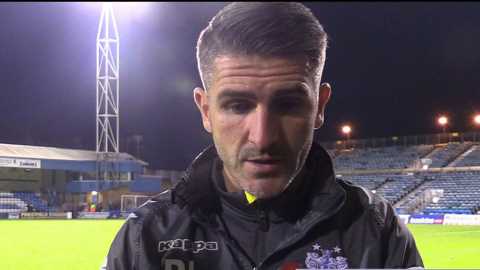 The award winning matchday programme features the thoughts of Darryl Eales, Pep Clotet and Curtis Nelson plus a great interview with Jon Obika. We also go On the Road to Walsall, catch up with Guest of Honour Mark Druce and we have news and views from all areas of the club and remember you can always read the programme on your phone, tablet or laptop. Each issue is available at matchdayfix.com/oufc/

The official report gors live with a full Gallery right here on the final whistle.

Oxford United were beaten by Bury this afternoon as two goals in the last ten minutes gave the Shakers victory. A James Henry goal looked to be sending United towards a win but subs George Miller and Harry Bunn turned the game on its head to give Ryan Lowe a debut win.

Agon Mehmeti almost made an instant impact on his return to the starting line up, denied by a superb sliding tackle just as he looked set to tuck a Henry through ball beyond visiting keeper Connor Ripley. Isaac Buckley-Ricketts then tested the keeper's handling on a wet and slippery surface with a low effort in the sixth minute.

The Shakers looked to shake it up after not scoring in their last eight league games and rattled the post in the 14th minute when a Chris Maguire corner pinballed dangerously around in the six yard box and flew off Mousinho before bouncing safely away.

With Zeli Ismail a constant nuisance on the right wing they looked dangerous. Ismail had the away fans howling for a penalty when Dwight Tiendalli challenged him on 26 and the lively Danny Mayor fired straight at Simon Eastwood two minutes later as Bury responded well to their change of Manager earlier in the week. Talking of changes, ref Rob Lewis lasted 34 minutes before limping off and being replaced by fourth official Adrian Waters.

United were patient, with much of the play going through Alex Mowatt in central midfield, but it took until the 45th minute for that patience to pay off. Buckley-Ricketts has bags of pace and looked good going forward, but this time showed a bit of strength when he won a challenge and set Tiendalli free on the left of the box. The Dutch right-back drilled a low cross along the six-yard box and Mehmeti cleverly stepped over the ball to allow it to travel to the back post where Henry hoovered up a simple finish.

Ripley, believe it or not, made a superb save seven minutes after the break which perhaps turned the course of the game. Jon Obika let fly with a superb first-time effort that was arrowing towards the top-left corner before Ripley flew to his right to push it away.

Buckley-Ricketts caused problems with a cross just after the hour as United pressed but Bury were still in the game at 1-0 despite United looking comfortable at the back for much of the game.

Henry fired just over on 72 and Bury were leaving more gaps for the Yellows to exploit as the game ticked on but on 80 minutes United were guilty of undoing much of their hard work when Tiendalli needlessly conceded a throw with a back pass that Eastwood couldn't keep in play. With a sickening inevitability the ball dropped inside the six-yard box and George Miller had a simple task of rolling it home from five yards out.

On 84 minutes it got worse. Bury hadn't scored in over 800 minutes but made it two in four minutes when sub Harry Bunn was granted the freedom of the penalty area from a simple clipped ball over the top that picked him out with just Eastwood in front of him. A low shot and it was 2-1 to the Shakers and back-to-back defeats for United.