Oxford United head for Stamford Bridge tonight as they take on Chelsea Under 21s in the quarter final of the Checkatrade Trophy.

United will wait on the fitness of Wes Thomas and Mike Williamson who both missed Saturday's game against Bury with minor injuries. Agon Mehmeti  and Alex Mowatt also picked up knocks in that game and are doubtful while Cameron Brannagan again misses out after turning an ankle in training last week. The new signing from Liverpool will be available when United return to league action at Charlton a week on Saturday.

Left-back Ricardinho returns after a three game suspension but Canice Carroll is ruled out after picking up two yellow cards in the competition. Rob Dickie is cup-tied but Isaac Buckley-Ricketts is available.

Midfielders Josh Ashby and Shandon Baptiste are added to the squad, the latter after returning from his loan spell at Hampton and Richmond Borough.

VIEW FROM THE DUG OUT

Derek Fazackerley takes charge for the first time after the departure of Pep Clotet and told us:

"It's a competition  that has been very kind to us over the last couple of years and we're really looking forward to it.

"We know the crowd won't be that big but Stamford Bridge is still a fantastic place to go and play your football and we are going to have to play well because those young Chelsea lads are a very talented bunch. They have already knocked Portsmouth and the MK Dons out so they will be very difficult opponents.

"But from our point of view with no game on Saturday we can focus on this game and we will certainly be playing our strongest team available. We will just wait and see on a couple of knocks and strains before we make a final selection but everyone is raring to go."

Joe Edwards is the man in charge of the young Blues  and he told the official Chelsea website:

"What this competition has shown us is the importance for every player to do their job well. In some matches at youth level, there’s loads of possession and it’s end-to-end with chances created throughout but these games are where the attackers have got to be clinical. That can be the difference between winning and losing but the boys at the back are equally as important.

‘People often talk about the new manager effect, where teams find an extra five or 10 per cent from the players because they’re trying to impress someone else, so that will be a new experience and a taste of the real world for our boys to come up against,’ our boss continues.

‘We’ve obviously been watching their last few games and we know they’re a decent League One team. They have a good balance of some talented footballers but can be very physical and direct at times as well. A lot has changed for them in the day or two leading into this game so we can’t be sure how they’ll set up now but we just have to get ourselves right and focus on what we want to do.

"The big test for us in this competition has been the mental and physical demand, playing against older players with senior experience and players a bit more physically developed.We know first and foremost we need to turn up, compete and earn the right to play, then ultimately we want to play our own game.’

Fans are reminded that there are no tickets available on the night. See below for full details. 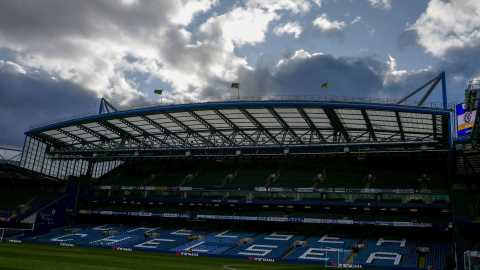 Oxford United's dreams of a third Wembley appearance in a row were ended by the young guns of Chelsea at Stamford Bridge tonight. Derek Fazackerley's first game in charge ended in a 3-0 defeat despite plenty of effort and passion from his hard-working United team.

Fazackerley stamped his mark on the side by switching to a three-man back line, where Charlie Raglan made his first appearance of the season, and asking Dwight Tiendalli and Ricardinho to patrol the flanks as wing backs. Ryan Ledson, restored to the centre of the park, set the tone with some trademark challenges early on, evoking the spirit of Ron Harris, but the Blues took a tenth-minute lead with their first attack of the night. Daishwan Redan made it with a powerful run into the area and although Simon Eastwood denied him, the loose ball ran kindly for Harvey St. Clair for a simple sidefooted finish to give the young Blues the lead.

There are two Bridges - the full Stamford Bridge of the Premier League and the cavernous echoing ground of this evening where the magnificent 1,000-strong travelling Yellow Army sang their team on to try and find an equaliser, but on 16 minutes it was 2-0 with a similar sort of goal. This time Callum Hudson-Odoi was the creator with the run towards the heart of the retreating yellow line. He timed his pass well and Redan provided the finish, giving Eastwood no chance. Redan Blues 2 Yellow and Blues 0.

It took two great saves from Eastwood to deny St Clair after 28 and 36 minutes, the forward very impressive and clearly enjoying the banter from the away fans after he shushed them when scoring the opener…

United had found it tough to counter the fast flowing movement of Chelsea in the first half but stepped up noticeably after the break, when Josh Ruffels had an early effort drift wide, and they were still in the game as they played towards their own fans with renewed spirit.

Isaac Buckley-Ricketts underlined his potential with a run across the face of the Chelsea defence and a low left-footed effort that smacked against the left-hand post, Ledson dragged a 50th-minute effort wide and United were much improved and looking dangerous; Ruffels again working keeper Marcin Bulka with a fine drive on 52.

They had shown plenty of  fight but were having to leave gaps to try and chase the game and on 64 they were heading for their first exit from the competition since they lost to Cheltenham Town in September 2014. Juan Castillo was the man to kill the game off, hustling to win the ball, running in from the left channel and curling a delightful effort beyond Eastwood to make it 3-0 and ease the Blues into the semi-finals.

United saw a Ricardinho free kick go just wide after 84 minutes and certainly asked questions after the break, but the Blues had been clinical in front of goal and also prepared to dig in and fight when needed. Good luck to them in the next round; very talented and only going to improve, although it will be interesting to see how many fans are at Wembley if they make the final.

United meanwhile regroup. They have no game at the weekend due to Wigan's FA Cup exploits but there is still plenty of football left in this season, starting when they return to London to take on Charlton a week on Saturday.